Nowy Targ is our next experience with building of entire city block. The area measuring 145x45m is located within the historic Old Town and guarded by a very rigorous zoning plan. The project selected in the competition was preceded by complex analyses of property structure, intended to come up with an optimal strategy for various ownership scenarios. What ultimately materialised was a variant that was most favourable for the city structure, in which, thanks to the investor’s acquisition of two additional private properties, we managed to avoid disparate juxtapositions and random divisions.

The post-war development of Nowy Targ square (designed by Ryszard Natusiewicz, Włodzimierz Czerechowski, and Anna and Jerzy Tarnawski) has been undergoing gradual restoration for several years, as has its surface – rebuilt in 2013 according to Roman Rutkowski’s design. The neighbouring edifice of the Municipal Office (the former Presidium of the Silesian Province, designed by Karl Löwe) serves as a yardstick against which other structures in this urban space are measured. In this very precisely defined context, we wanted the building to bear the hallmarks of metropolitan architecture with the proper scale, adapted to the surroundings and using durable materials. At the same time, we tried to create an office building model that would not be an introverted structure that only benefits from the perfect location and the existing infrastructure of the city. Our overarching intention was to provide the building with a ground floor bustling with shops and service outlets that would be available to residents also after office hours. In the concept submitted for the competition, we proposed the construction of a seven-storey building with rhythmic, concrete-and-glass facades with characteristic cut-outs in the form of courtyards located on the second floor level and viewing terraces. As part of the ultimate development of the area, comprehensive activities have been planned throughout the entire quarter: reconstruction of ul. Wita Stwosza, planting of a row of plane trees along ul. Św. Katarzyny (preceded by unprecedented public consultations) and the location of a coherent set of elements of street furniture. The façade shows a clear structure of divisions resulting from the external conditions imposed by the surroundings and the assumed functional division of the interiors. The reach and size of the spatial elements cross-section varied depending on the compositional role and location within individual façades, and after numerous experiments the decision was made to expose the sunken aggregate by graining the surface of prefabricated elements.

We hope that in discussions about the future of our cities, Nowy Targ will be an example of an office building location which, due to the vitality of several thousand employees and publicly-available ground floors accessible directly from the street, positively affects the dynamics and liveliness of nearby streets and becomes an important element preventing functional monoculture in city centres. 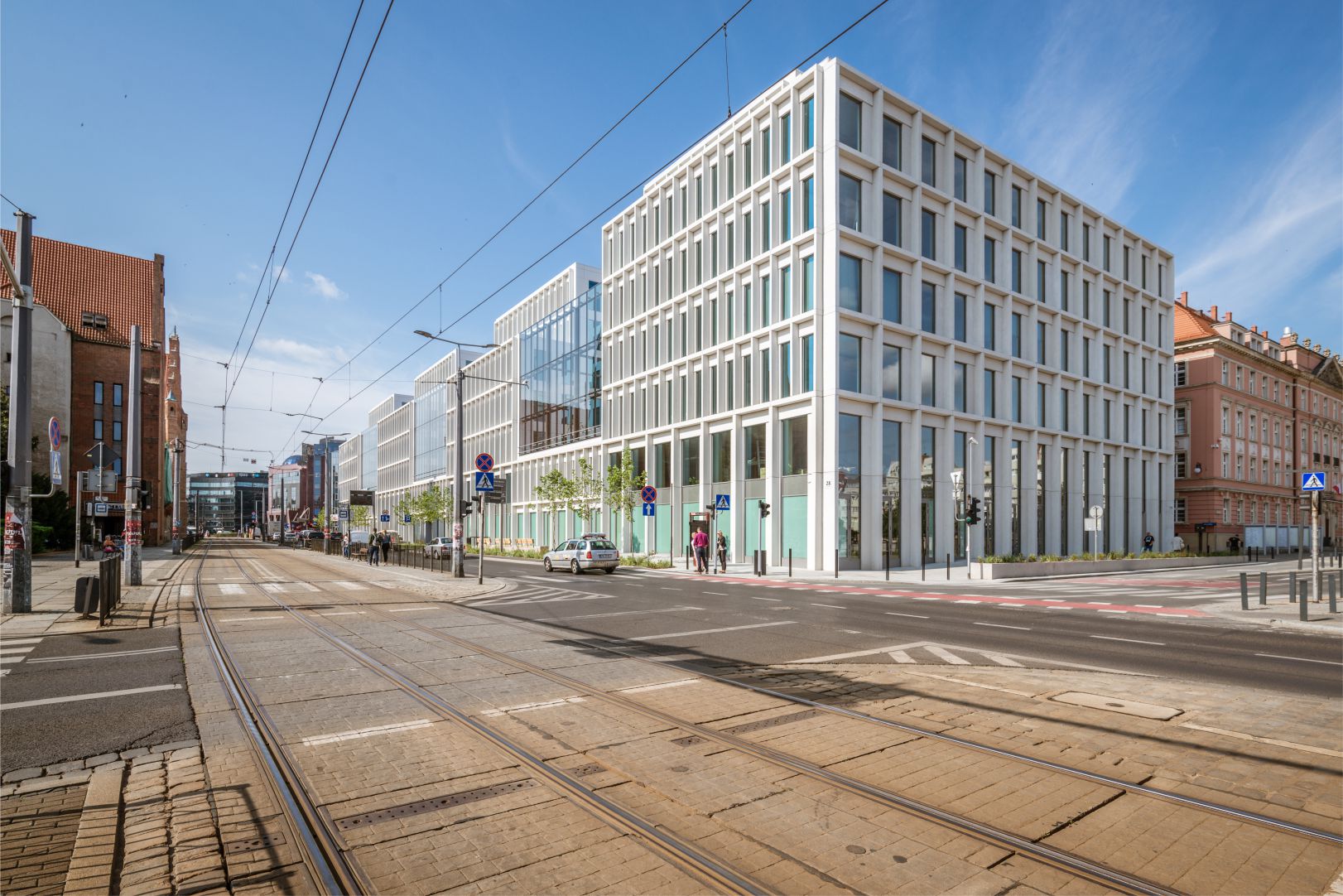 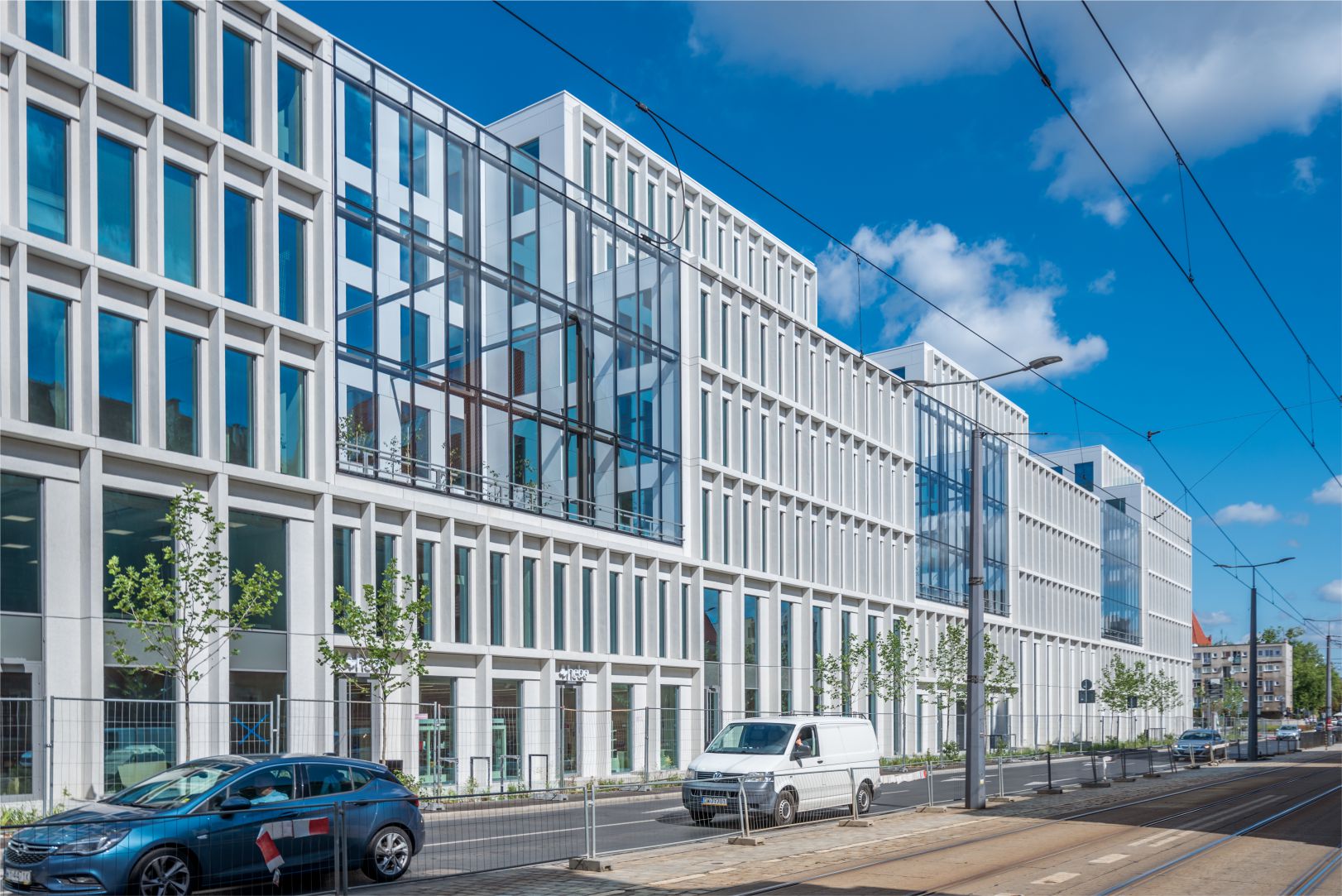 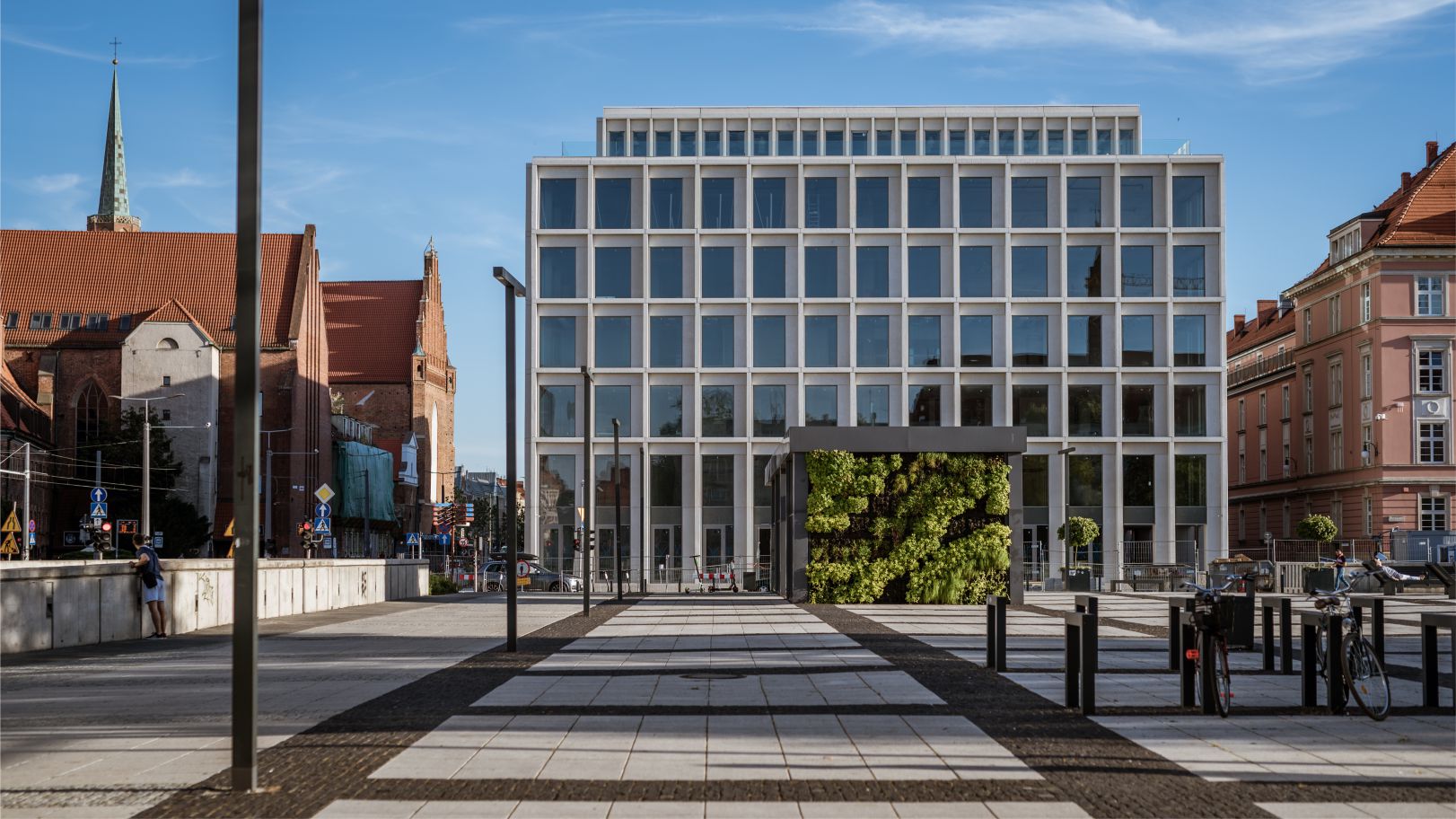 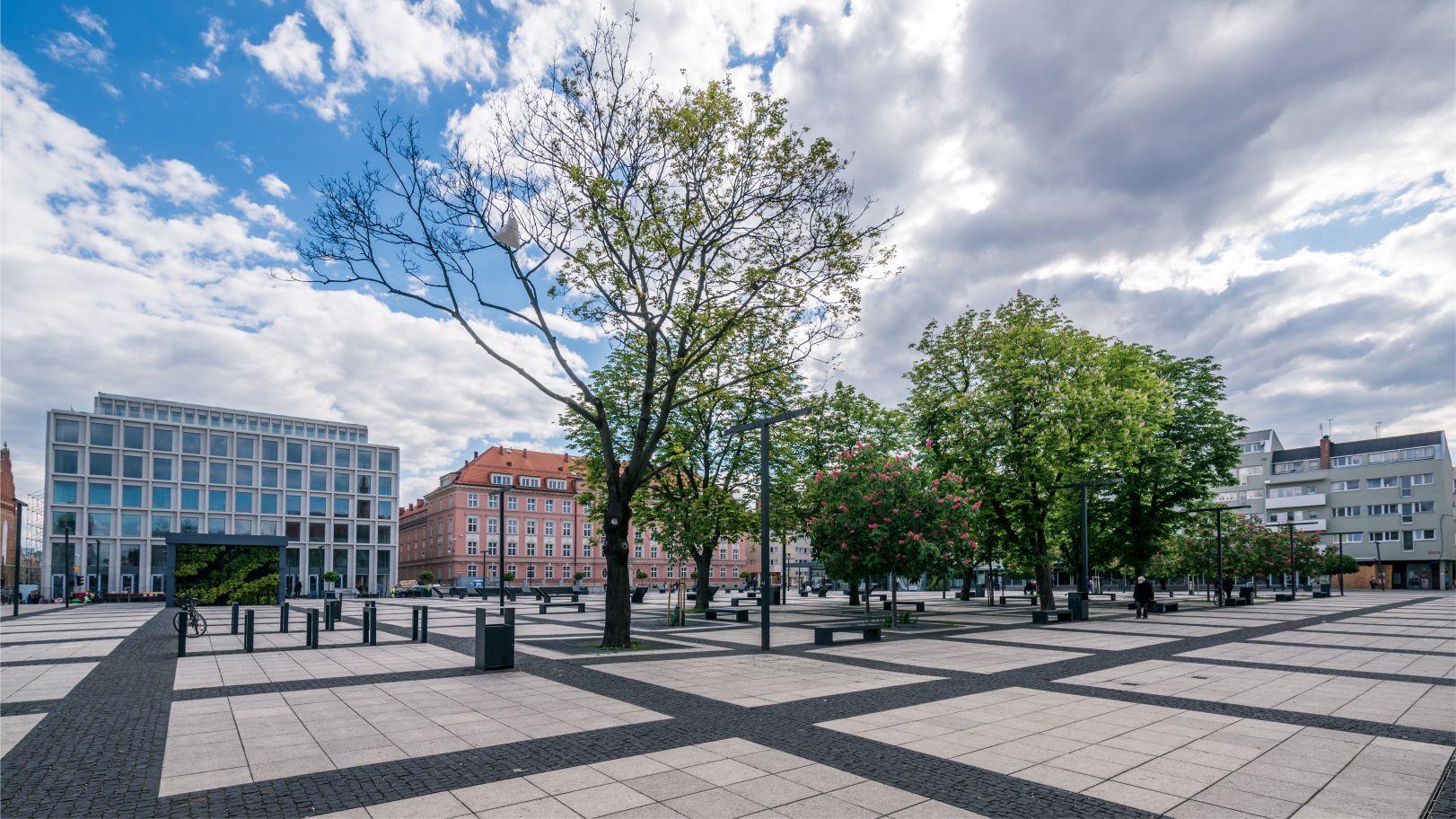 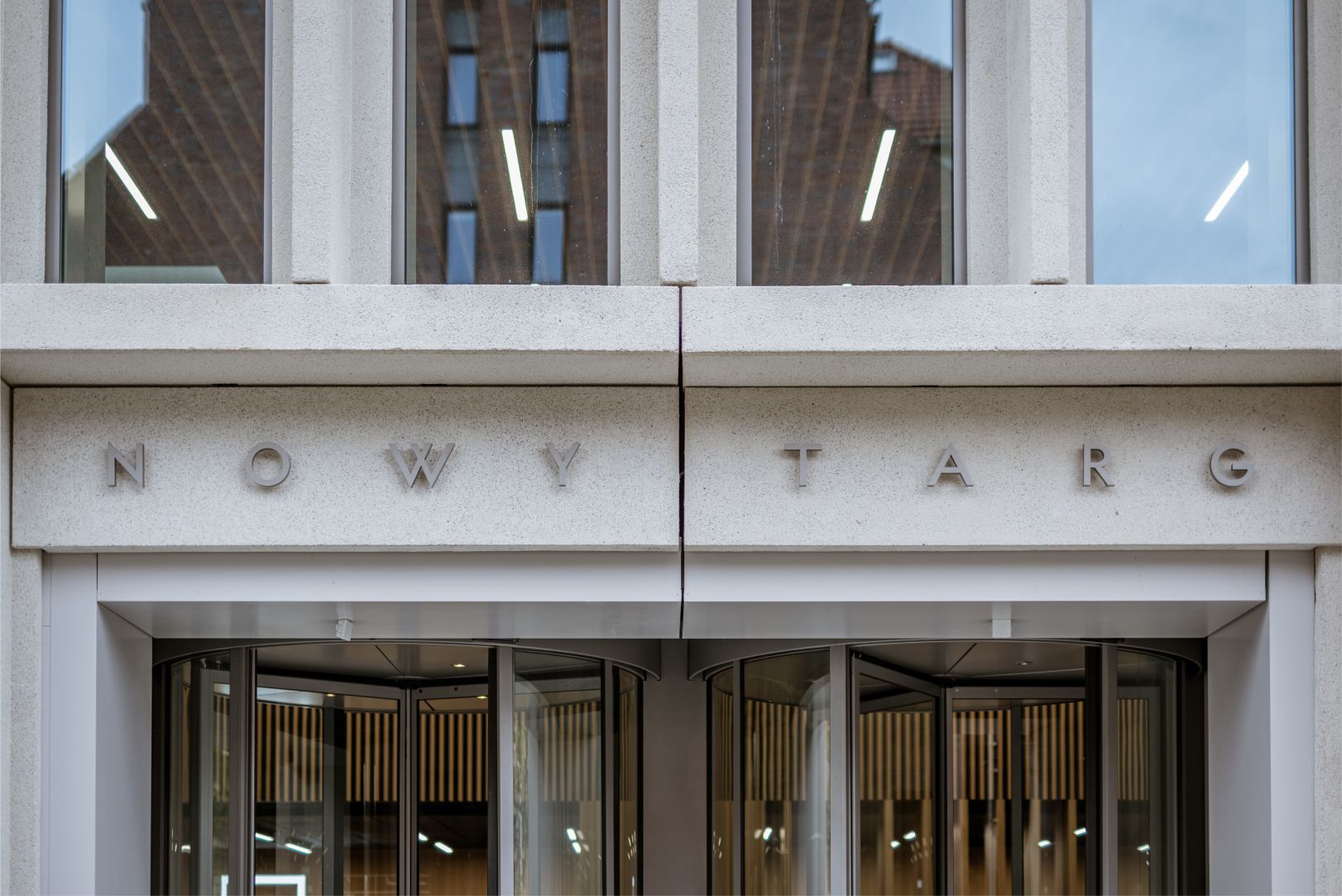 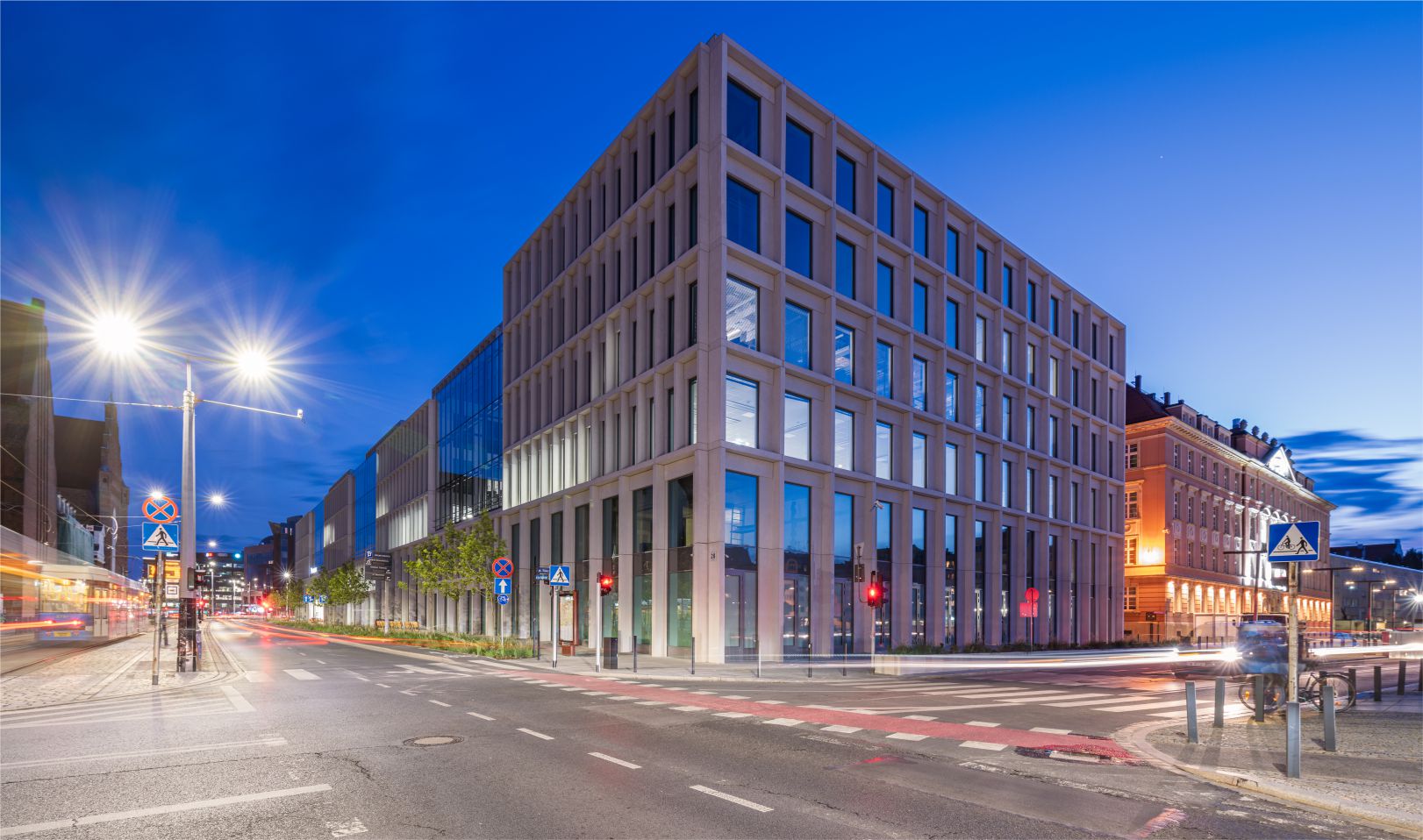 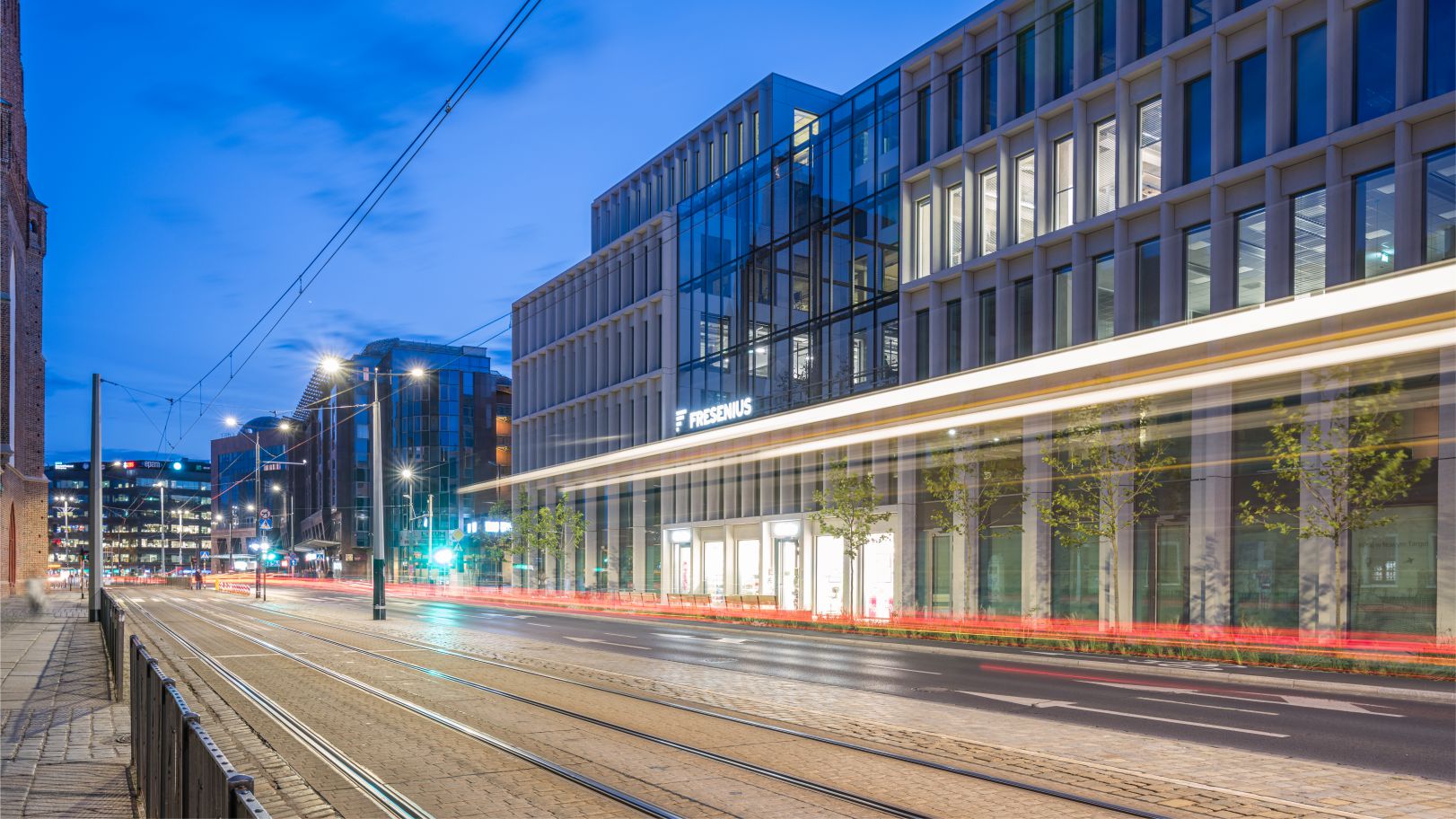 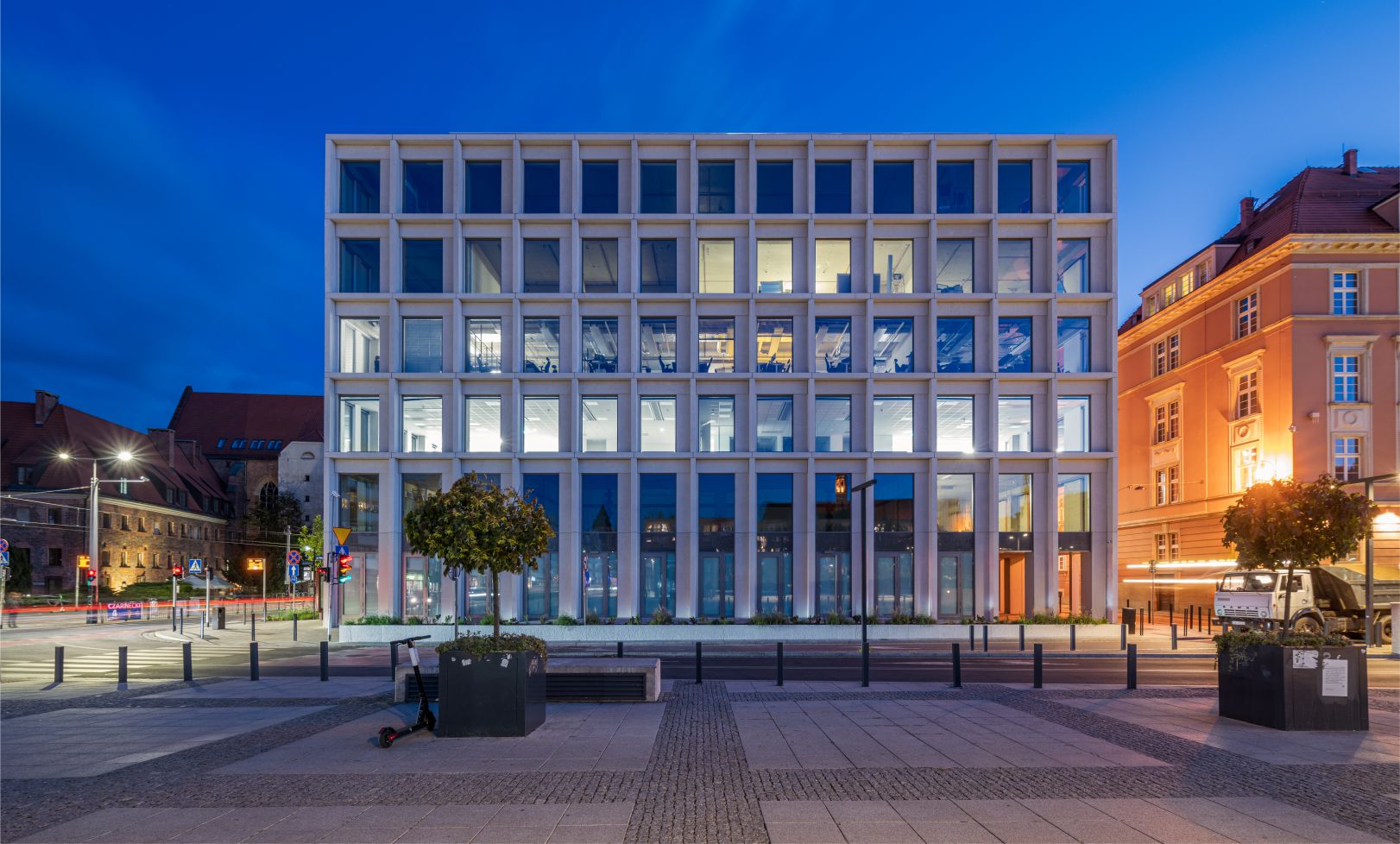 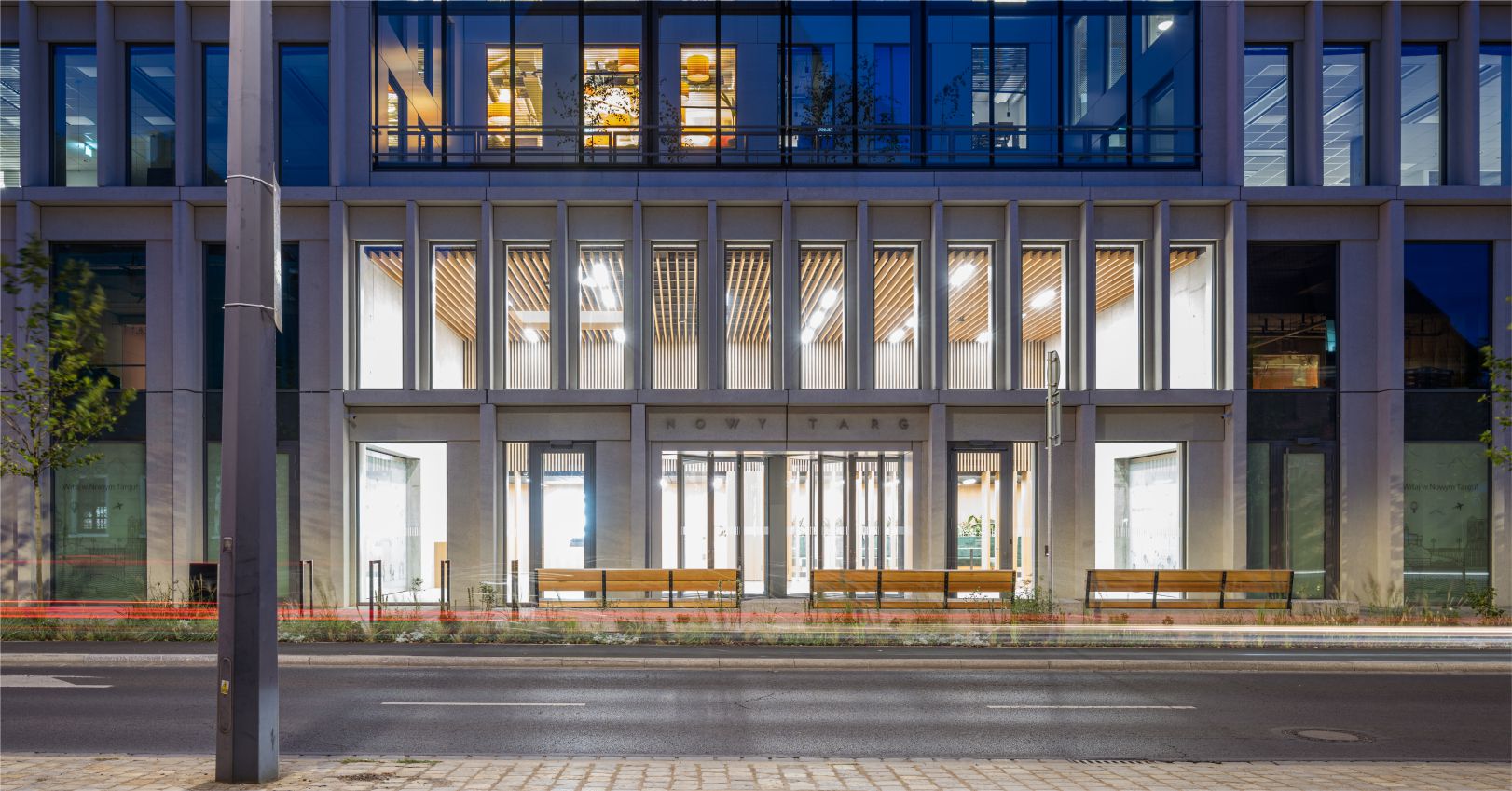 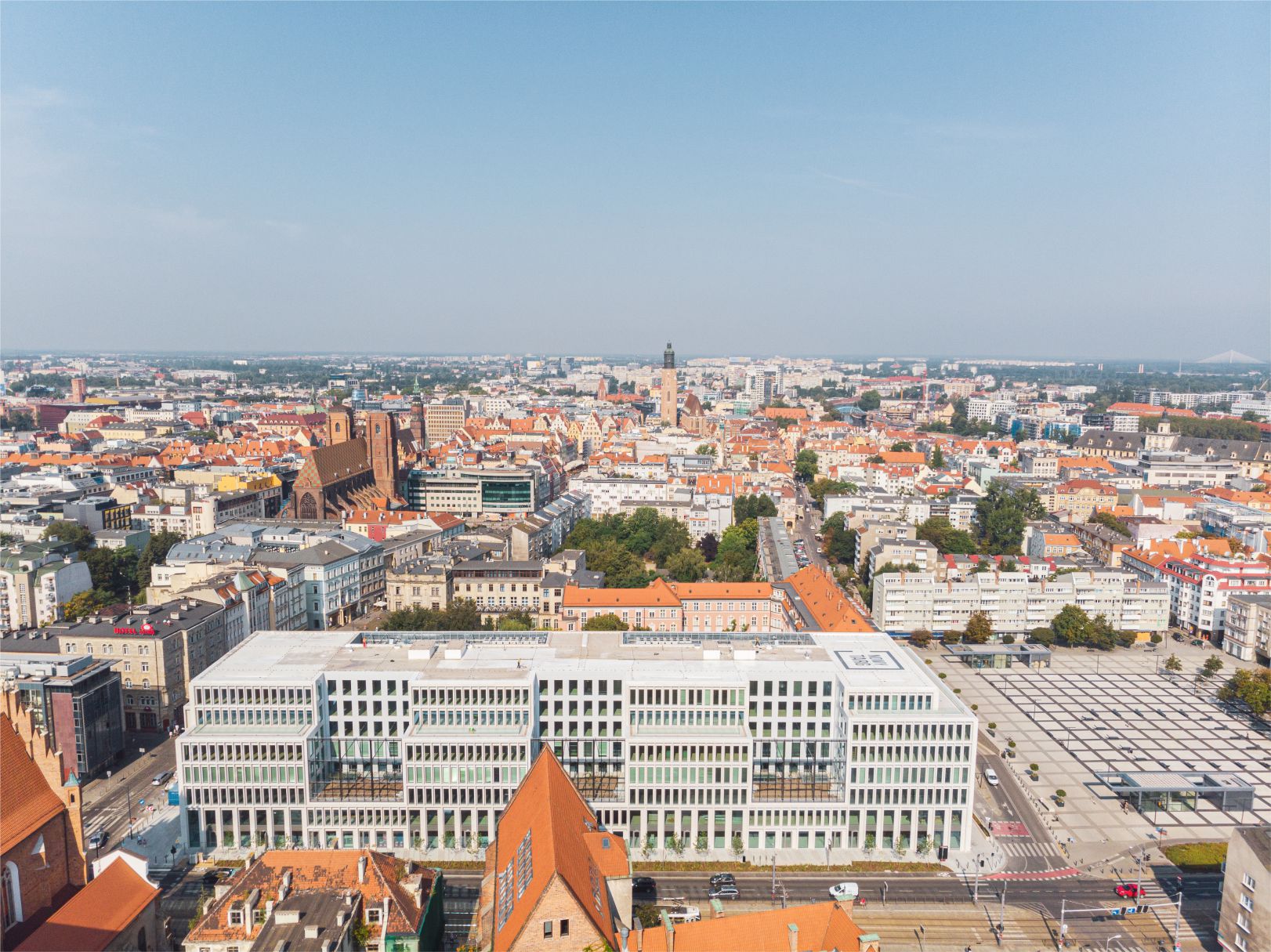 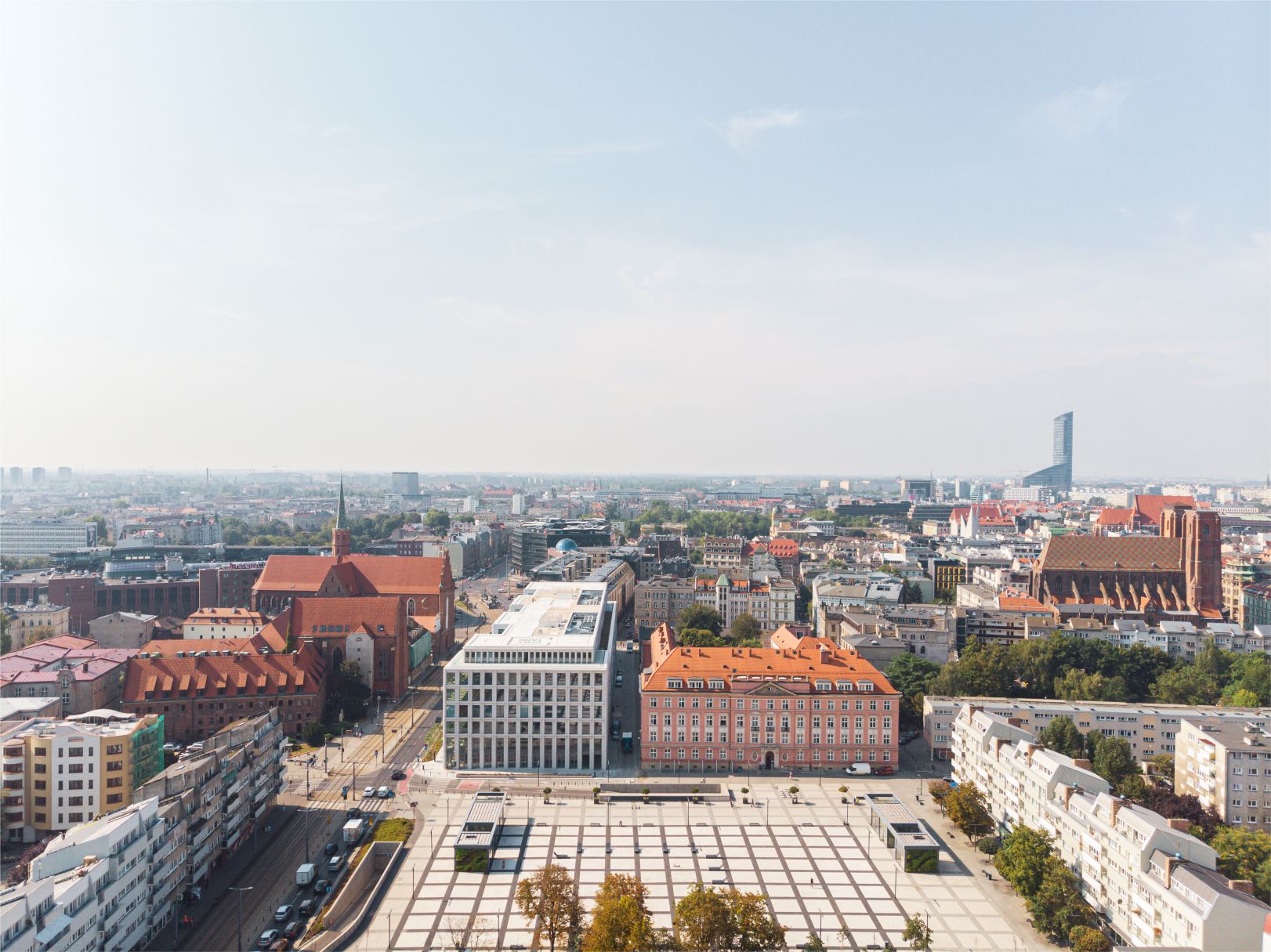 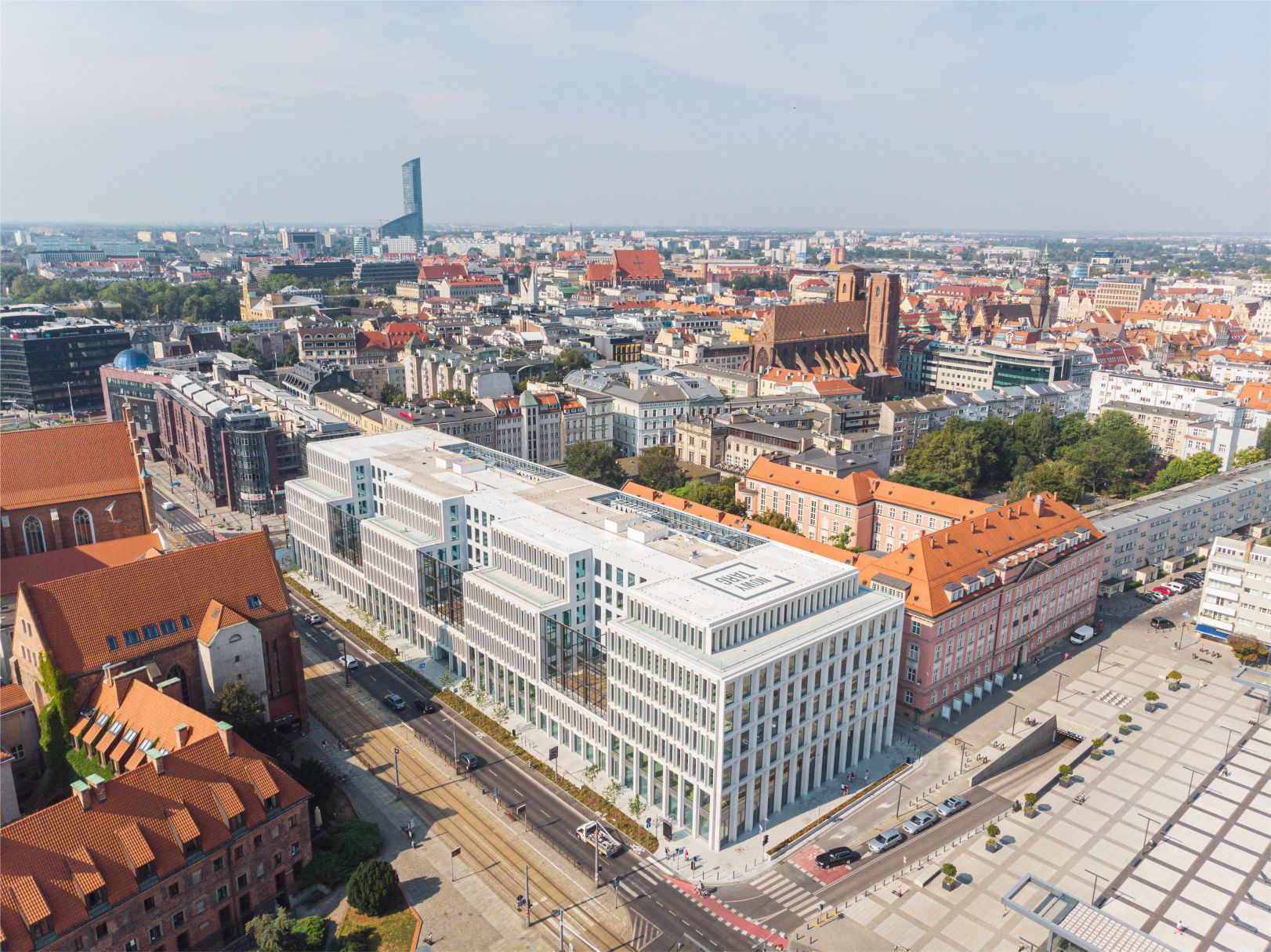 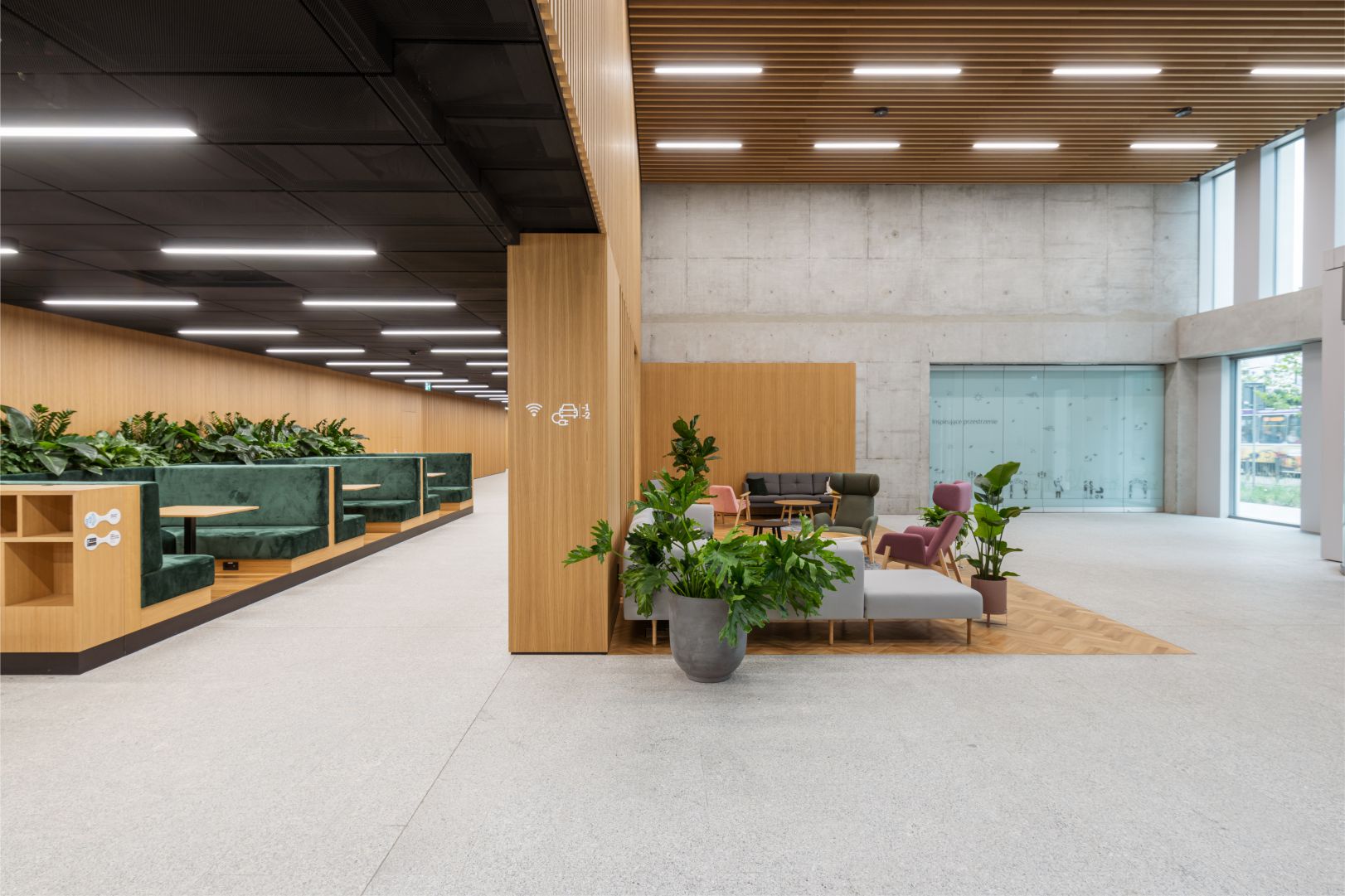 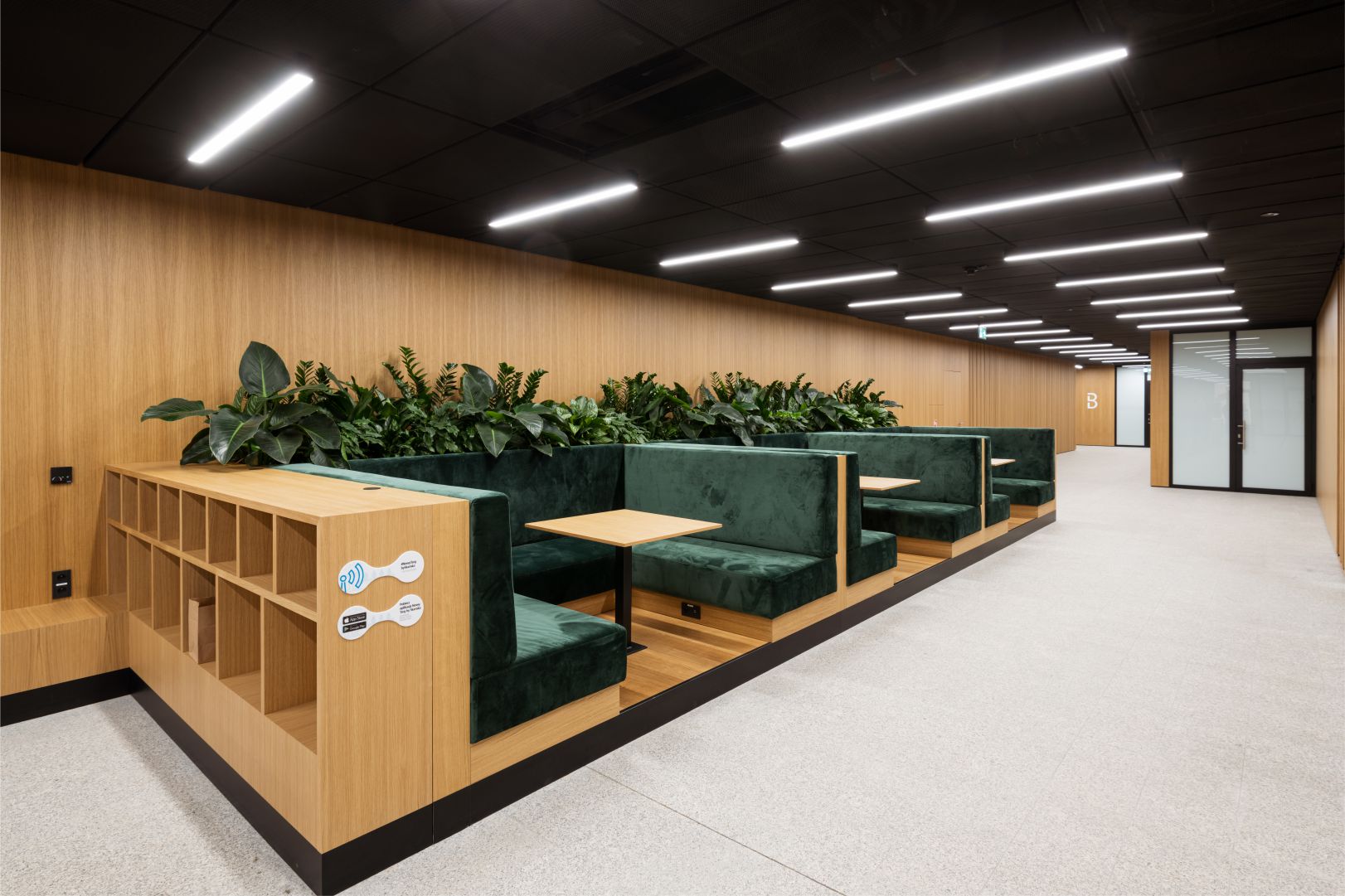 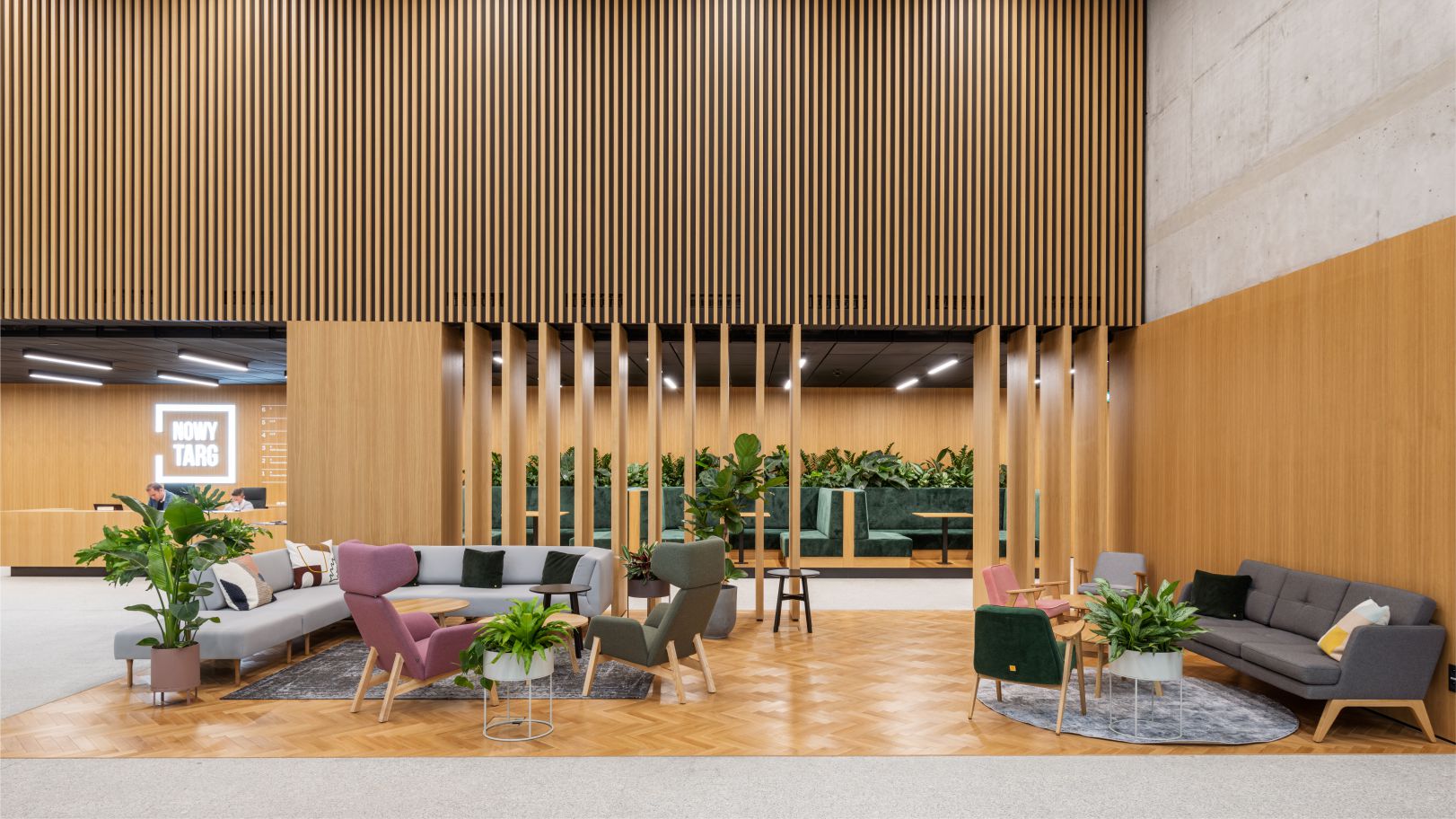