We made this small project with intention to organize and revitalize the space of a typical courtyard between 19th century townhouses. We also wanted, perhaps manifesting a bit, to decontaminate a piece of the city. Summer in the city without greenery is gradually more and more difficult to endure. Hence the idea to create a comfortable space, giving shelter from the sun, being both an extension of our office and a meeting place for residents of the tenement. The form of the terrace was designed for easy accessibility for all users – a low platform, equipped with fixed furniture, arranges the space using simple forms.
This is one of our smallest projects ever done. To realize it we removed from soil 30m2 of concrete. First of all we arrangeded an arboristic care for magnificent glandular aylanthus (aka ‘Mietek’), which was placed in the central part of our terrace. Among others, sanitary and care cuts of the crown as well as loosening and aeration of the soil structure were carried out. The existing tree provides natural protection from the sun on hot summer days.
The terrace is made of narrow 5.5 cm x 2.65 cm boards, spaced at 1 cm intervals, which creates an openwork structure that does not block the natural absorption of rainwater by the soil. To make a terrace, we used certified softwood, which came from forests where sustainable forest management is carried out. We consciously decided not to use chemical wood preservatives – thanks to that we did not introduce about 10 liters of oils, which are based on solvent, into the environment. The wood species we have chosen (Siberian larch) has natural resistance to weather conditions and even without any chemical maintenance it will serve us for at least 10-15 years. Over time, its natural color will be covered with a gray patina.
After freeing another 40m2, we designed a garden. Filling this small area with numerous shrubs and perennials will ensure lush, dense, understory greenery in the future. We also planted two beech trees, which will create a natural protection from the sun for the southern, strongly sunny elevation of the building. The entire 70m2 has become a biologically active area and helps us to better manage rainwater within the courtyard.
We invited all residents of the tenement house to the first phase of the project (cleaning the courtyard). We did something like a neighbourhood co-op, bought tools, plants and ordered transport. The terrace itself was made by a professional company. After all of this we had a barbecue, which lasted until the early morning hours. 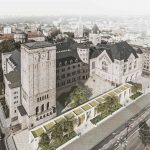 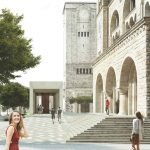 The chapel arose from the need for a gesture that is quite rare today – a votive offering for the construction of the Wrocław city ring road (AOW). However unusual this task may be, we have tried to translate the traditional model of sacrum, to contemporary forms and meanings. The religious space, historically defined by the cubature of the object of worship, has been symbolically dessolve here. Due to the interesting continuous interaction with the AOW we decided to build conventional spatial borders. EPCH 420 energy-absorbing barriers, which form five offset rings, virtually cut out the space, making it “safe” in the symbolic meaning. In order not to interrupt the perimeter of the rings, we decided to lift them slightly so that they could be entered, while at the same time creating a moment of culmination of form lined with a religious symbol. The geometry of the polygons together with the supports defines the centre of gravity, in relation to which the contemplation bench was placed. In this way a simple interaction was created between the viewer and the functioning highway, filtered through religious symbolism.

The vast majority of the elements used to build the chapel are recycled and dismantled. The bent barriers still bear the marks of traffic accidents, perhaps one of them saved someone’s life. The concrete and asphalt used for the base slab laid abandoned after the motorway was built and overgrown with weeds. In an era of public discussion about industrial waiste and ubiquitous kitsch, it has been possible to convince church representatives for the contemporary form and recycled thinking.

The venue is completely open and accessible at any time of day or night. Located next to a newly developed recreational route, it can become a short stop on the way for those not seeking contact with religion. Abandoned in the traffic chaos, in a flowery meadow, its intriguing geometric form may become a contribution to a short reflection on the transience of life. 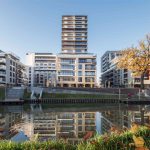 It is a special project because it does what we care most about – it builds the city. It’s not just about housing, it can be done by everyone. Angel River also delivers added value for the city through the revitalisation impuls, which we hope will have a positive impact on the surroundings. Angel River is a continuation of the development carried out in the first phase under the trade name Angel Wings, and it’s just another part of a larger whole. It forms a compact block of development that opens up with semi-private interiors to the Oława river, while on the other side it co-creates high quality public space, creating an enclosure for the downtown square. The remaining walls of this space will be built in subsequent stages of the investment, already creating one of the first contemporary downtown spaces in Wrocław. Additionally, the tower building is a height accent which marks the presence of the new residential complex within the dense urban fabric of Przedmieście Oławskie. It is worth emphasising here that the buildings of the Angel River complex “spill over” in a positive way into the immediate surroundings, creating public and semi-public spaces also outside the area which directly belong to the investor, and in this way they bring new quality into the city.

Virtually all important decisions concerning the design stemmed from the location. The matrix of the necessary solutions was dictated by the situation of the plot near a park and close to a busy thoroughfare, where city understood as a dense fabric of interconnected quarters no longer exists. This was the starting point for a series of decision processes. The first priority – to save as many trees as possible – was achieved by inscribing the building into the outline of the previously existing object (a swimming pool with auxiliary facilities). By trying to fit the body of the school into gaps between loosely scattered trees, we not only minimised the number of removed trees, but also came up with a simple, almost typologically banal building.

The functional layout of the school was designed to ensure a very clear sense of direction inside the building, its zoning and optimal lighting of classrooms.

The functional division of the building is based on a lobby which simultaneously serves as a hall and a recreation zone while separating the classrooms from the busy street. Other functions (a sports hall, a library, a conference hall) are integrated with the main body by means of a space that makes it easier to manage the traffic of the main users of the school as well as guests (fans during sporting events, conference participants, readers). We decided to take this maze of functions to the extreme – the sports field is located on the roof, which saved a lot of trees.

From the side of Ślężna Street, the lobby is lined with laboratory rooms, whose specificity made it possible to use light coming from above. This decision gave us the formal incentive to suggest a dynamic composition of the façade. The windowless wall from this side ensures protection against noise. The subject of acoustics was treated with great attention throughout the design phase. The building itself – its three storeys along the entire length of the plot – performs the function of an acoustic barrier for park users. The windowless lab rooms “hanging” on the elevation reflect and break up sound waves. The classrooms, the conference room, the sports hall and the library are also acoustically insulated.

The classrooms are situated from the side of the park in order to provide them with optimal south-eastern sunlight, insulate against noise and offer unobstructed view of the greenery.

The construction of Secondary School of General Education no. 5 was delayed in time. When our studio won a national competition for the design of the school building in 2007, we could hardly imagine that the object would materialise after a decade. Such designs usually fail to stand the test of time, and we had to revisit it ten years after winning the competition. All the decisions were easy, although sometimes radical due to the specificity of the conditions. We are pleased that apart from a few minor technical corrections the building was constructed exactly as intended.

It is fascinating that over a century before the appearance of hybrid objects in architectural typologies, structures were built which can change their functions so easily. This was the case here: an electric tramway depot first turned into a bus garage, and then into a museum. But one thing at a time.

In the 1870s, when a building boom started in the south-western part of the city, apart from tenements new industrial plants were built, together with the accompanying infrastructure. In 1892, on the initiative of merchant M. Wehlau, the company Elektrische Straβenbahn Breslau in partnership with Allgemeine Elektricitäts-Gesellschaft launched a modern electric tramway line and constructed the necessary depot. Unfortunately, the complex of depot halls was dramatically destroyed during the war activities. Its remains were adapted for providing services to buses.

Before preparing the concept we came to the conclusion that retaining the composition of the detached objects, reflecting the spatial arrangement of the historical halls, will endow the project with a spatial quality. The designed complex will ultimately comprise a research and training centre, which will also be the venue for conferences and lectures. For this reason the entire functional structure of the adapted halls was subordinated to the ultimate plan, in which two independent objects will act as one complex, with the main entrance situated in the axis of a multifunctional square and leading to the underground level. This enabled us to preserve the intact shape of the hall and restore its exteriors to its heyday, with only minor modifications signalling the new function. In the future, the underground entrance zone will smoothly lead to a multifunctional square that will serve as an extension to the exhibition areas and offer an opportunity of conducting a wide range of activities facilitating the educational purpose. This gesture does not introduce disharmony in the urban plan of the oblong bodies of the buildings, which is so typical for the industrial areas along this section of Grabiszyńska Street.

A modern museum gives a chance to the entire district by providing a new public space in the so far industrial part of the city.